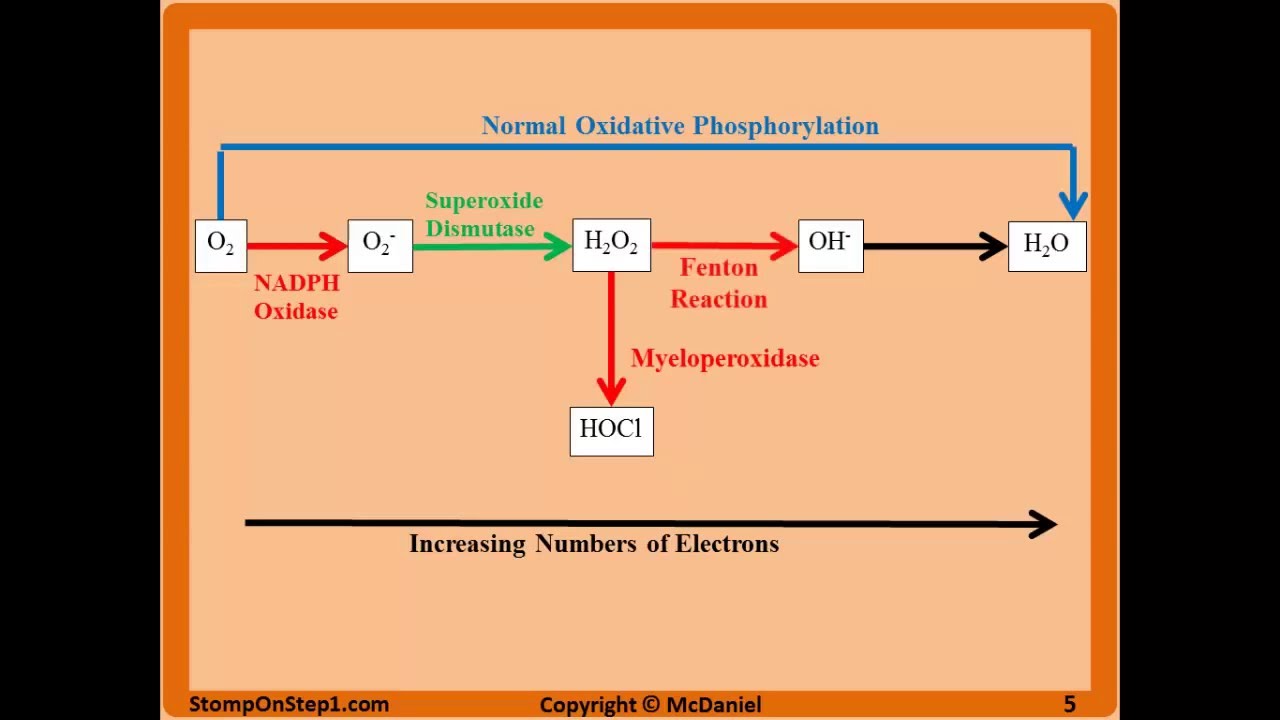 http://www.stomponstep1.com/free-radicals-glutathione-superoxide-nadph-oxidase-n-acetylcysteine/ Free Radicals are very reactive molecules which have unpaired (single) outer electrons. These molecules damage cell membranes via peroxidation and DNA via oxidation. Free radicals can be generated by things like ionizing radiation (X-rays & UV light), drugs (acetaminophen), poisons (carbon tetrachloride CCl4), or certain metals (Iron). However, free radicals are also naturally generated in the body by enzymes. For example, neutrophils use free radicals during acute inflammation to destroy things like bacteria. So free radicals are not always a “bad” thing. Normal oxidative phosphorylation in the mitochondria can also generate free radicals. Usually 4 electrons are added to oxygen to get water. However, if that process is somehow interrupted you can end up with free radicals. Reperfusion following ischemia generates free radicals as well. The ischemia generates inflammation which then meets the oxygen in the blood (which can be converted to superoxide) and inflammatory cells (which can create free radicals). This presents clinically as an MI patient who gets worse after treatment. The body has enzymes for neutralizing free radicals. There are also vitamins that can neutralize free radicals. These vitamins are called Antioxidants. Vitamins A, C, & E are the main antioxidants (Think Ace like the playing card). • NAPDH Oxidase converts oxygen to Super Oxide (O2- ) mainly in neutrophils • Myeloperoxidase (MPO) converts peroxide (H2O2) into Hydrochloric Acid (HOCl) mainly in neutrophils • Fenton Reaction generates Hydroxide (OH-) from peroxide (H2O2) using iron • Superoxide Dismutase (SOD) converts Super Oxide (O2- ) to peroxide (H2O2) • Glutathione convert Hydroxide (OH-) to water • Catalase converts Peroxide (H2O2) to water We will see in the immunology section that that a defect in NADPH Oxidase causes Chronic Granulomatous disease. This is an immunodeficiency due to the neutrophils inability to generate free radicals needed to destroy foreign material. Specifically this makes individuals susceptible to reoccurring infections by catalase positive organisms. Most microorganisms are catalase negative (they don’t have catalase) which means they have a small amount of naturally produced peroxide which can be converted to HOCl by the neutrophils. This HOCl can then be used in place of superoxide to destroy phagocytized material. Catalase positive organisms make their own catalase enzyme which degrades the peroxide and prevents this procedure. Another similar immunodeficiency if MPO deficiency which prevents neutrophils from creating HOCl. Glutathione is one of the enzymes that can remove free radicals. Glutathione must be in its reduced form to convert peroxide to water. NADPH, which is created by the pentose phosphate shunt, reduces Glutathione. Glucose-6-Phosphate Dehydrogenase Deficiency (which will be covered primarily in the hematology section) is a deficiency of a key enzyme in the pentose phosphate shunt that limits the creation of NADPH. This means less glutathione & more free radicals which end up damaging blood cells. Excessive amounts of Acetomenophen (like that seen in suicide attempts) can be metabolized by the liver into intermediates which bind to and remove glutathione. This reduction in glutathione means free radicals build up and damage the liver cells. The treatment is N-acetylcysteine which is a precursor to glutathione.

How to Read Nutrition Facts | Food Labels Made Easy

This is Your Pregnancy in 2 Minutes | Glamour