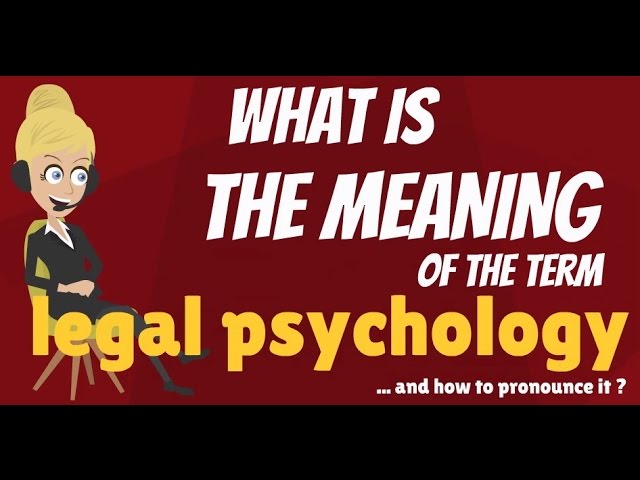 ✪✪✪✪✪ http://www.theaudiopedia.com ✪✪✪✪✪ What is LEGAL PSYCHOLOGY? What does LEGAL PSYCHOLOGY mean? LEGAL PSYCHOLOGY meaning. Legal psychology involves empirical, psychological research of the law, legal institutions, and people who come into contact with the law. Legal psychologists typically take basic social and cognitive principles and apply them to issues in the legal system such as eyewitness memory, jury decision-making, investigations, and interviewing. The term “legal psychology” has only recently come into usage, primarily as a way to differentiate the experimental focus of legal psychology from the clinically-oriented forensic psychology. Together, legal psychology and forensic psychology form the field more generally recognized as “psychology and law”. Following earlier efforts by psychologists to address legal issues, psychology and law became a field of study in the 1960s as part of an effort to enhance justice, though that originating concern has lessened over time. The multidisciplinary American Psychological Association’s Division 41, the American Psychology-Law Society, is active with the goal of promoting the contributions of psychology to the understanding of law and legal systems through research, as well as providing education to psychologists in legal issues and providing education to legal personnel on psychological issues. Further, its mandate is to inform the psychological and legal communities and the public at large of current research, educational, and service in the area of psychology and law. There are similar societies in Britain and Europe.

What are metabolic processes

What TO DO After A WORKOUT!

What is IUI treatment for Pregnancy

Which Vitamin B12 Supplement Should We Take? Dr Michael Greger

Anatomy and Physiology of Human Body

Do You Need PROTEIN on Non-Workout Days?

How To: Seated Leg Curl (Cybex)

How to do a Barbell Row- Fitness Zone at intosport.com

How To: High Cable Chest Fly